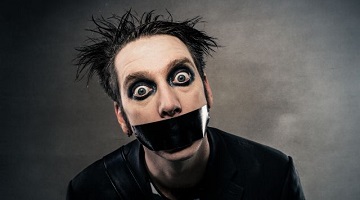 Date:
Location:
Mississippi Moon Bar
Cost:
Tickets from $20.00, plus tax and convenience fees.
Buy Tickets
This show has been rescheduled from March 27, 2021. All previously purchased tickets will be honored on the new show date.

Mime with noise, stand-up with no talking, drama with no acting. Viral sensation Tape Face has to be seen to be believed.

Tape Face, real name Sam Wills of New Zealand, gained national attention during his run in 2016 on America’s Got Talent as a season 11 finalist and again in 2019 on America’s Got Talent: The Champions. He has headlined two limited engagements at Bugsy’s Cabaret at Flamingo Las Vegas in 2017 and now a multi-year residency at Harrah’s Las Vegas. He uses no dialogue in his performance, stretching black electrical tape across his mouth. His show is a series of comedy bits and sleight-of-hand magic acts, often with audience members pulled to the stage and, has been a top draw on his world and U.S. tours.

This truly is comedy made for everyone, guests must be prepared to get involved and become heroes on stage, as they step inside a comedy world unlike any other. Visually stunning, heart-stopping, and hilarious, you’ll laugh, you’ll cry, and when it’s all over you’ll be completely speechless. Just like Tape Face.